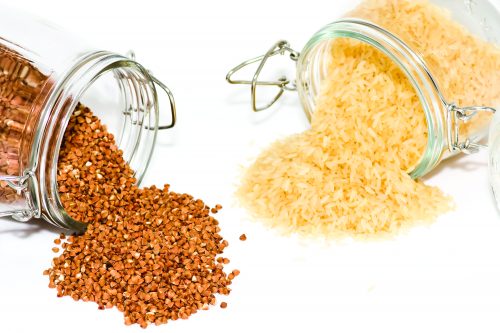 With a range of alternatives to wheat now available, nutritionist Dr Sue Shepherd investigates what they are, what to do with them and what they can do for us.

Almonds are often referred to as nuts but they’re actually the seed of the fruit of almond trees. Almond meal is almond ground into a flour-like texture.

Amaranth is a high-protein grain with a strong, distinct flavour. The flour is made from ground amaranth seeds and is best used as part of a flour blend.

Arrowroot is virtually tasteless and is made from a tropical American plant. It contributes ‘stretch’ and chewiness to baking.

These are names for flour made from roasted chickpeas, often used in Indian cooking. Besan flour is an ideal substitute for soy flour.

Although ‘wheat’ appears in the name, buckwheat is not related to wheat at all! It is a seed with a strong nutty flavour and it is the main ingredient in soba noodles.

Nutritionally, chestnuts are closer to a grain than a nut. They are also seasonal, similar to fruit, and have a sweeter flavour.

In some countries (including New Zealand), flour made from wheat can still be called cornflour, but gluten-free cornflour must be made from maize (another name for corn).

Cornmeal (also called polenta) is ground corn that is not as finely ground as cornflour. It has a grainy mouth-feel.

Millet is not a grain but a grass. It is a wheat-free staple in African, Indian and Asian countries. It has small, round, yellow kernels that swell when they are cooked.

This is a very fine white flour with virtually no flavour. It is made by grinding potato to a pulp and removing the fibre and protein through water-washing.

This ancient grain (pronounced ‘keen-wa’) is now increasingly available as a whole grain and flour, and in pasta and breakfast cereals. It has a slightly bitter taste.

Rice flour is a major contributor to a wheat-free flour blend and it is essential in any wheat-free pantry. The texture can range from fine to gritty. Glutinous rice flour (which is gluten-free) provides elasticity and has a neutral taste.

This is a high-protein flour made from soy beans. It can have a strong flavour, which can be bitter. Bitterness decreases with cooking, but it is best to purchase de-bittered soy flour if possible.

This is made from ground, dried pearl tapioca (small white balls of the cassava root). Tapioca flour has little flavour and it is useful in a wheat-free flour blend. Its elastic properties give a chewy texture to baked goods.

The best choices for: