How to choose low-fat cheese 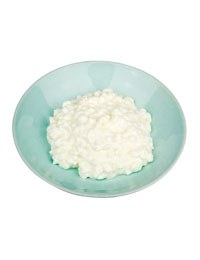 There are lots of different cheeses in the supermarket chiller. Here are some tips to help us make good choices that still satisfy.

For our heart health we're encouraged to reduce the amount of saturated fat in our diets, so these cheeses should be consumed in moderation.

Traditional Greek feta is made with either sheep or goats' milk but cows' milk feta is also common here, presumably because we have lots of cows. Standard feta is around 20% fat (14% saturated) and because it's cured in brine it's pretty high in sodium.

Chèvre salade is similar to feta but with a creamier texture and much less sodium. Crumble or cube small amounts of either into salads to add a distinctive flavour and texture.

A standard cream cheese has 37% fat (23% saturated), so always go for the reduced-fat varieties which have around 17% fat (10% saturated) while still retaining their flavour. Cream cheese is great in sandwiches – a thin spread adds loads of flavour – or on a cracker topped with tomato. Interesting flavoured varieties are now available too.

Originating in Europe, where households used to make their own supplies, cottage cheese is made from skim milk so is naturally a low-fat cheese. Standard cottage cheese has 3.5-4% fat, with reduced-fat varieties as low as 0.5-1% fat. Cottage cheese can be used in sandwiches, on crackers and in salads.

Processed cheese is made from cheese and other milk products; it is heated and melted to form a uniform consistency. Available in separately wrapped slices, these are a low-fat alternative (below 10% fat, some are much lower) which can add the cheddar cheese flavour for sandwiches and toppings.

A word about calcium

In general dairy products are excellent sources of calcium; however they are not all equal. Cottage cheese is low in calcium with only around 60-75mg per 100g. 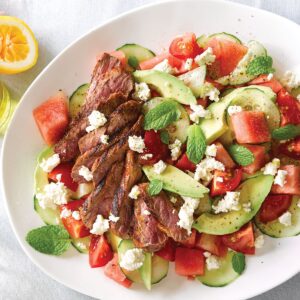 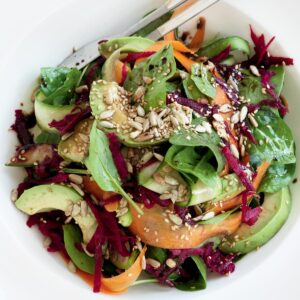 Raw vege side salad with avocado and seeds 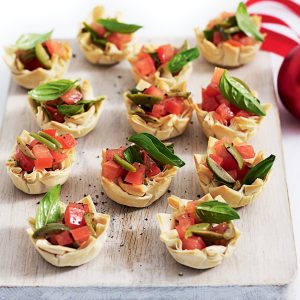