The truth about fermented foods 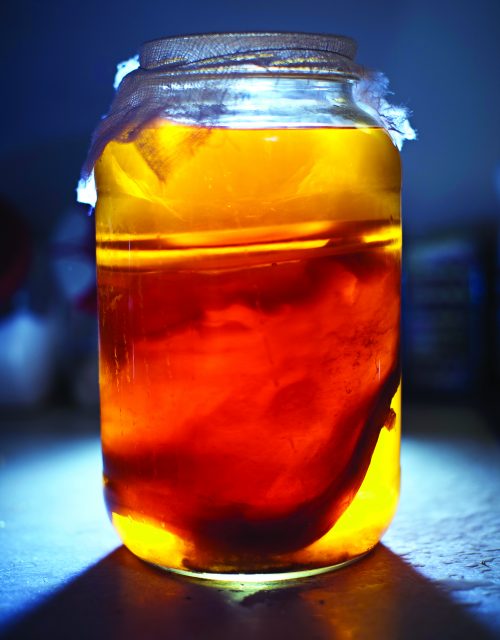 Kombucha, sauerkraut, kimchi or kefir… fermented foods are being lauded for their beneficial bacteria. Dietitian Katrina Pace looks at the science behind the health claims.

Fermented foods have been a health-food buzz for some time now, and people are even learning to make their own. They’re taking to social media and weekend workshops to talk about about bubbling pots, cabbage smells, second ferments and how to stop mould growth. Kitchens have become chemistry labs. And now, with fermented foods breaking free from health food stores, appearing on supermarket shelves, we know that they have reached the big time. So, what are fermented foods and what’s all the hype about?

Going back to the old ways

Originally, fermenting food was a way to preserve produce from harvest time through the cold days of winter. But more than that, fermented foods were thought to have unique health properties.

Almost every culture in the world has its own traditional fermented foods, but not all are health foods. Common foods that you may know well, without realising they are fermented, include chocolate, cheeses, salami, tea and yoghurt.

Food can be fermented by adding in bacteria or yeasts (cultured ferments), or by creating an environment that enables bacteria to grow and ferment naturally on the food (wild ferments).

Pickled vegetables were fermented by adding bacteria and salt rather than vinegar, which is often used today. Traditional fermented porridge in Scotland and Ireland has come back to popularity as ‘overnight oats’. Fermented bean products, such as douchi from China, tempeh from Indonesia, or miso and natto from Japan, are often seen in Asian supermarkets. Kaanga wai (fermented corn) is a traditional Maori fermented food, and poi, a fermented taro paste, is common in the Pacific Islands.

The current interest in fermented foods is less to do with food preservation and more to do with the bacteria that are produced during fermentation. Fermentation increases the bacteria in the foods (which is why they are called probiotic foods). Regularly eating fermented foods is like taking probiotic capsules – we can positively influence the bacteria that grow in our digestive system. Fermentation also helps to pre-digest the food, which means it is often easier to digest, and vitamins and minerals are in a form that is easier for the body to use. The amounts of vitamins A, B, C and K also increase during fermentation. Other byproducts of fermentation have been shown to reduce inflammation and have metabolic effects on the body.

There are three types of fermented foods that are causing a bit of a buzz (or fizz) at present: kefir, kombucha, sauerkraut and kimchi. All of them are now available in health-food stores or supermarkets, or you can make them at home cheaply and easily.

Kefir is traditionally a fermented milk drink, similar to yoghurt. Milk is fermented by clusters of bacteria (called ‘grains’) and yeast for about 24 hours. The bacteria digest the lactose and the resulting liquid is slightly sour and fizzy to taste and virtually lactose free. More than 20 strains of beneficial bacteria and yeast have been identified from milk kefir. Water and coconut kefir are also available to make and buy. Although they contain fewer bacteria, they are good options for people who need to avoid milk.

Kombucha is a fermented black tea drink. Sugar and black tea are fermented together using a SCOBY (symbiotic culture of bacteria and yeast). Kombucha has antimicrobial and antioxidant properties and has been shown in animal studies to reduce diabetes risk, treat gastric ulcers and reduce cholesterol.

For the best bacteria, you can’t go past fermented cabbage products such as sauerkraut or kimchi. But why is this? Bacteria that hide in the folds of cabbage leaves convert natural sugars to lactic acid. Cabbage-based fermented foods are known to be high in Lactobacillus plantarum, which is a superstar in the good-bacteria club. Sauerkraut is a European-style of fermented cabbage. Kimchi is the Asian version, where cabbage is fermented, usually, with daikon radish, ginger and garlic. It can be quite spicy! Typically, it is served alongside Korean meals.

In Korea, it is thought that eating kimchi can help fight obesity. Given the changes to gut bacteria, it does seem possible that kimchi might play a role in this. Several studies involving obese Korean women have reported changes in gut bacteria that are related to weight loss. The bacteria in kimchi change gut bacteria to favour those common in lean people. Regularly eating kimchi seems to alter gut bacteria and changes how the body harvests energy, which may support weight loss.

Not only do gut bacteria make neurotransmitters and neuromodulators, such as dopamine, noradrenaline, acetylcholine and gamma-aminobutyric acid (GABA), but certain bacteria have recently been found to need GABA to grow. A change in gut bacteria has been observed in some people with irritable bowel syndrome and seems to be linked to depression and anxiety.

Both human and animal studies have shown that taking certain bacteria can improve feelings of well-being and reduce anxiety. The main bacteria found in sauerkraut are Lactobacilli plantarum, which have been shown to produce neurotransmitters that may help reduce depression.

Many chronic inflammatory disorders have been linked to a highly processed Western diet, which changes gut bacteria growth and species dominance.

Tummy troubles such as gas, bloating, cramps, irritable bowel syndrome, diarrhoea and constipation may be due to the bacteria growing in your gut. The bacteria in fermented foods can withstand the acid in the stomach and, with natural fibres, are transported along the whole digestive system. Studies have shown fermented foods can change the bacteria that grow in your gut, reduce ‘bad bacteria’ and improve tummy troubles. Find it hard to digest cabbage? Don’t worry, fermentation makes cabbage easier to digest, so even the most tender tummies can manage it.

A pilot study published in 2014 in the Turkish Journal of Gastroenterology indicated that people suffering from chronic constipation might benefit from taking 500ml per day of milk kefir. In the study, stool frequency was significantly increased, stool consistency was improved and laxative consumption was decreased. Colonic transit time was increased in the ‘slow transit time constipation group’ and bowel satisfaction scores were increased. Kefir has also been associated with reduced insulin resistance and inflammation in animal models of metabolic syndrome.

Fermented foods will cure my diabetes

Nothing can ‘cure’ diabetes, but there are indications that regularly eating fermented foods could help control blood-glucose levels. Researchers have found changes in gut bacteria that happen with diabetes can affect how the body harvests energy (contributing to obesity) and encourage inflammation.

Research on animals has shown that drinking kombucha regularly can change enzyme activity that reduces blood glucose rises after meals. It does this by reducing the amount of glucose that is absorbed during digestion.

Kombucha is high in antioxidants, polyphenols and organic acids, all of which affect digestion. But be careful, as store-bought kombucha can be much higher in non-fermented sugar than homemade.

Milk kefir, taken over the long term, has been shown to improve glucose tolerance and decrease blood-glucose levels. Also, it has been shown to reduce inflammation and increase insulin uptake. Milk kefir can be used alongside diet and medication to reduce high blood glucose and oxidative stress damage in people with both types 1 and 2 diabetes.

Fermented foods will stop my allergies

There is a link between the types and range of bacteria in your gut and your risk of developing allergies. Several lactic acid bacteria found in kefir have been associated with changing gut bacteria to be favourable to preventing allergy. How do they do this? Bacteria can change the immune signals sent out by the body. These studies suggest that consistent use of kefir could help relieve allergy symptoms. Remember, cow’s milk in any form is not suitable for children under one year old.

What should I be careful of?

Bought sauerkraut can be high in histamine, which may increase allergy reactions in people who are sensitive. However, probiotics and fibres can improve the gut and aid production of diamine oxidase (a histamine-digesting enzyme), which may help reduce allergies in the long term.

Sauerkraut may react with monoamine oxidase inhibitors (an old form of anti-depressant) due to high levels of tyramine. Speak to your doctor or dietitian before you eat fermented foods.

Always introduce fermented foods to your eating routine slowly. Too much, too soon, is likely to make you feel worse.

Fermented foods can be very acidic. Although they need to be acidic to kill the bad bacteria, too much acid can make teeth sensitive by causing demineralisation, and can remove tooth enamel, a process called dental erosion.

How to make kombucha 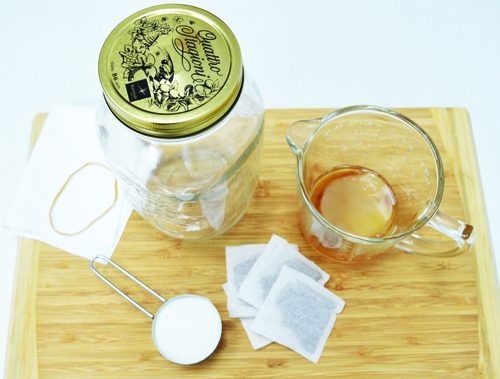 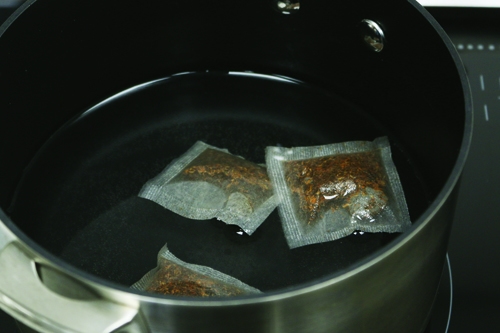 1. Boil water in a pot on the stove. Add sugar and tea and stir till sugar dissolves. Let tea bags or leaves steep for about 10 minutes (or until brewed to your liking), then remove. Leave tea to cool to room temperature. 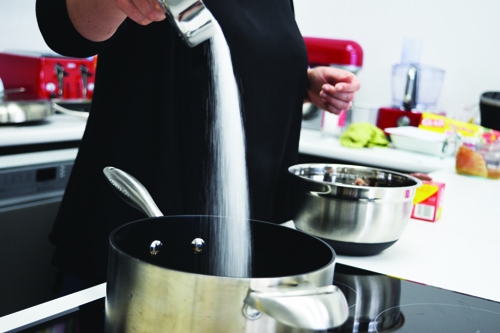 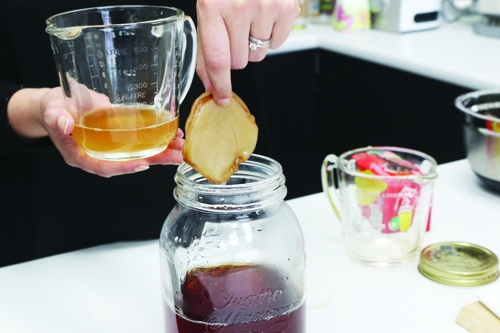 3. Cover jar with a cloth or paper towel and secure with an elastic band. Leave for 4-7 days somewhere where the temperature doesn’t fluctuate. The sourness will increase over time. 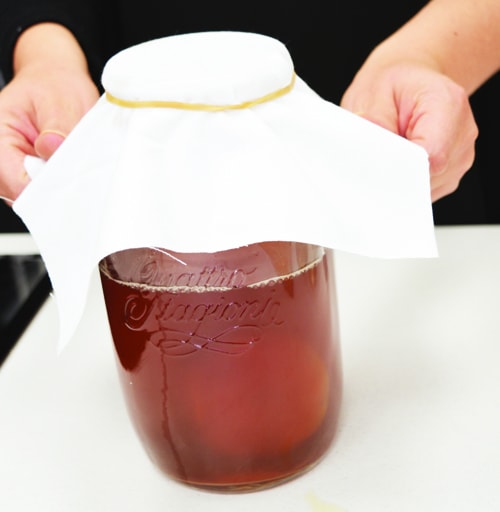 4. When it’s to your taste, remove the SCOBY, with clean hands, and put it in a bowl with 1/2-1 cup of kombucha. Bottle the remaining kombucha and store it in the fridge or a cool place till you’re ready to drink it. 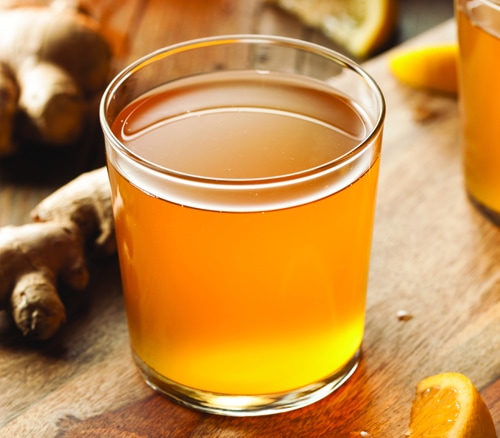 5. Add flavourings such as vanilla pod seeds, frozen berries or grated ginger and lemon, or just drink it as is.

What you should know about drinking kombucha

Kombucha is a health drink and not a soda. Start with 50ml a day and build up to around 250ml. Initially you might experience adverse symptoms, such as headache or diarrhoea. Just keep drinking small amounts before one meal daily. The beneficial bacteria can change your own gut bacteria within a few weeks.

Always have a glass of water after your kombucha so the acid doesn’t affect the enamel on your teeth.

Don’t start taking kombucha when you are pregnant or thinking of getting pregnant.

Kombucha is low in sugar because the sugar is used up by the SCOBY. 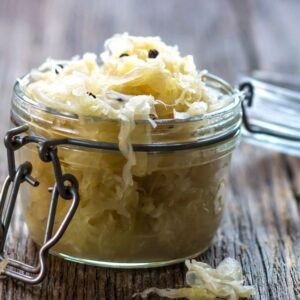 How to get yourself into a pickle 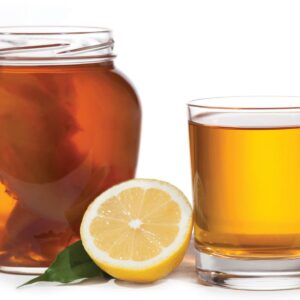 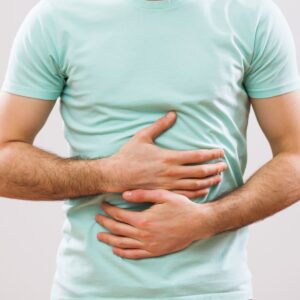 Gut and mood: The surprising connections 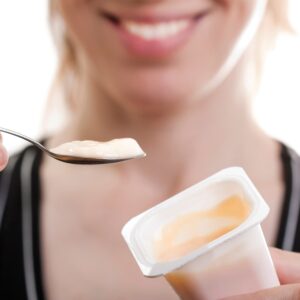