HFG guide to chips and crisps 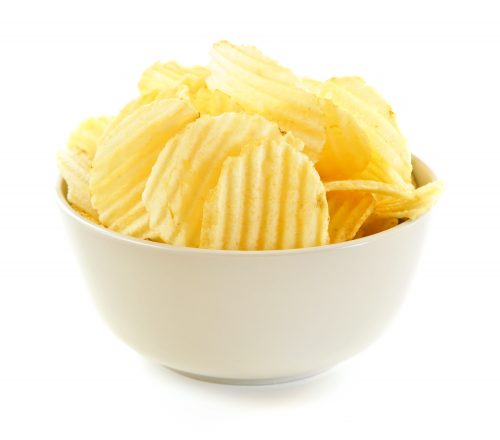 Nutritionist Rose Carr investigates what goes into our chip and crisp packets.

Sorry, we haven’t managed to reclassify chips and crisps as ‘health food’ yet, but there are some better choices. These are still, however, ‘energy-dense’ rather than ‘nutrient-dense’, and they can be high in sodium, so chips and crisps still remain in the ‘occasional food’ basket.

Standard potato chips are around one-third or more total fat, and around 15% or more of the artery-clogging, heart-stopping saturated fat.

Given the popularity of crisps, and their convenience when it comes to entertaining and other ‘treat’ occasions, the good news is there are now quite a few options that are a lot lower in fat, and especially saturated fat. We found quite a few products with less than 25% fat, some a lot lower, and more importantly, plenty to choose from with less than 5% saturated fat. And there hasn’t been any taste compromise to achieve this.

Thanks to the amount of fat in traditional potato chips, they’re also high in energy. Most are 2000-2300kJ per 100g. The small bags of chips are around 45-50g so we could gobble our way through 1000kJ pretty quickly. For most of us that’s too much for a snack, and they are not what you’d call ‘satisfying’ or ‘nutritious’ food. Be aware that even the better choices are still high in energy at around 1600-2000kJ per 100g, so we’re definitely not recommending them as an everyday snack.

The amount of salt (sodium chloride) we consume with potato chips varies widely between the different varieties, but it can be a lot. Higher intakes of sodium are associated with high blood pressure, a risk factor for heart disease. So if the saturated fat doesn’t get you, the sodium just might! We’re disappointed a number of the products lower in saturated fat are higher in sodium. Even though we expect these to be an occasional food, people with high blood pressure might want to just keep away from the higher sodium products.

Don’t be fooled by the word ‘light’ on potato chips. Some have the same amount of fat as standard potato chips.

Another trap on the packaging can be wording like “80% less saturated fat”. It’s easy to misread this and miss the word ‘saturated’. Less saturated fat is a good thing. But please don’t assume these chips are low fat, because they are often not. Make sure you have a good read of the Nutrition Information Panel.

The products available vary widely, so when selecting a product we need to decide on our own priorities first. For example, those with high blood pressure will want to find the lower-sodium products; for those watching their weight, low energy will be a priority. If these criteria don’t apply to you, we suggest using lower saturated fat as your top priority, then lower fat, but do look at the other criteria as well. Use the checklist to help with your selection.